Should Cherrydale Library's Operations Be Reduced to Three Days per Week? The Discussion in 2009 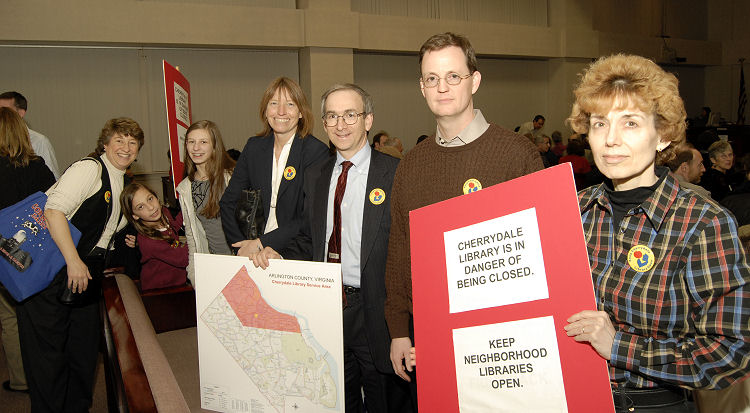 On February 23, 2009, the county government announced that its proposed budget for FY2010 would include a reduction in the operation
of the Cherrydale, Aurora Hills, and Glencarlyn branch libraries to three days per week. The reduced schedule would begin on July 1,
2009, when the FY2010 county budget took effect.

These proposed reductions were endorsed by the Arlington County Federation of Civic Associations and the
Fiscal Affairs Advisory Commission.

Citizen opposition to the cuts ran high. The Citizens for Cherrydale Library immediately posted an on-line petition
contesting the proposal. The petition ultimately drew 843 signatures. Many of the petition signers wrote comments
beside their signatures. One County Board member told a CCL officer on April 23, 2009 that the Board had received
"thousands" of e-mails and letters contesting the plans to curtail the hours of Cherrydale Library. 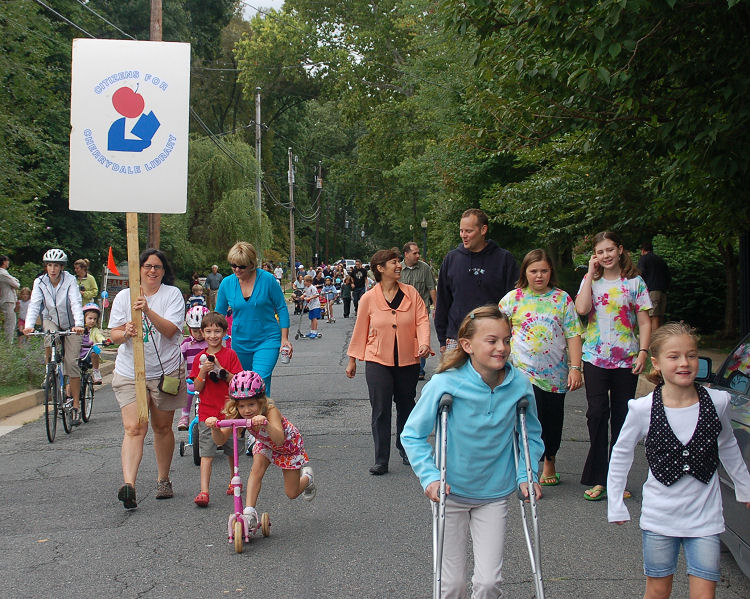 Marcy Gessel carried the sign for the Citizens for Cherrydale Library contingent in the annual Cherrydale Neighborhood Parade, September 12, 2009.

On April 20, 2009, the Arlington County Council of Parent-Teacher Associations endorsed the position of Citizens
for Cherrydale Library in a formal resolution.

Ultimately, the County Board on April 23 announced that Cherrydale Library would be closed only one day per week rather than three days.

At the beginning of the budget cycle, on February 24, County Manager Ron Carlee told NewsChannel 8, “If the economy improves, we might be
able to go back to four, five, or six days again.”

"It wasn’t the tax rate, but rather Carlee’s proposals to shutter Gulf Branch Nature Center and
reduce hours at three branch libraries, that drew the most controversy in the community. In the
end, board members opted not to further anger those constituencies, and essentially backed down
on both issues.

"County Board member Chris Zimmerman, whose tenure dates back to an earlier proposal to close
several branch libraries, said this year’s debate had been worth having, but that the community
had spoken.

“ 'Branch libraries serve a different kind of function than Central Library does,' he said."

Nine-year-old Rebecca Joskow on March 26, 2009 wrote a report on the community effort to save Cherrydale Library.
This was one of several articles which earned her membership in Time for Kids--an offshoot of Time magazine--and an exciting day
at the White House, where, on September 2, she interviewed presidential speechwriter Sarah Hurwitz.

_______________________________
This site is maintained by Citizens for Cherrydale Library, a grassroots group seeking since 1998 to promote and preserve our most important neighborhood institution. Contact us at suza1@comcast.net with any questions or comments.