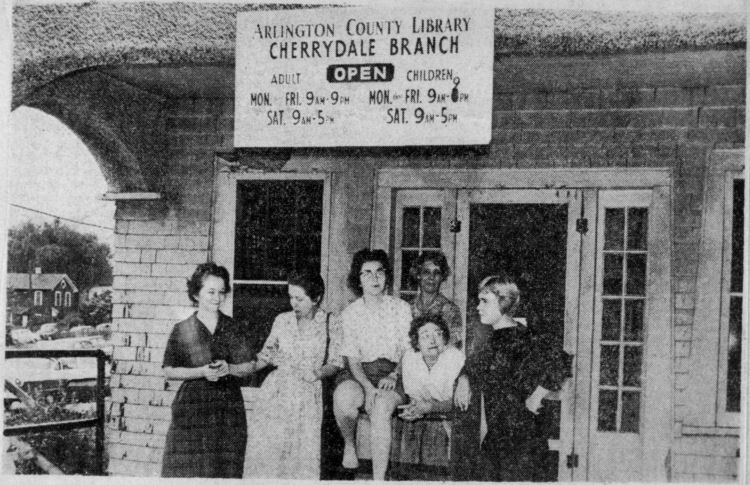 Cherrydale Library has always reflected the civic engagement of its neighborhood. It was formed in 1922 by the Cherrydale League of Women Voters and the Patrons League (the old name for the Parent-Teachers' Association), making it the oldest community-initiated Library in Arlington County. Many of the founders or their spouses were members of the Cherrydale Volunteer Fire Department, which held several fund-raising events to establish and later enlarge the original 1922 book collection. Until 1938, the library occupied a room in the old Cherrydale Schoolhouse, site of today's Cherrydale Health and Rehabilitation Center on N. Nelson Street. In 1938 Cherrydale Library moved to a little building at 3828 Lee Highway, site of The Bromptons today.

From January 1941 until October 1942, the library was located in a corner of the room above the Cherrydale Fire House. It then moved to 4010 Lee Highway, where Essy's Carriage House now stands. The library was here only until 1946.

During 1946-61, Cherrydale Library occupied the former Cherrydale Children's Clinic at 4006 Lee Highway, which, if it were still standing, would sit to the east of N. Quincy Street, on the site of today's Brown's Honda dealership. The building was demolished in 1961.

The campaign to build a new library building began in 1957, when eight north Arlington PTA's and eight local civic associations formed a Northeast Library Committee. These civic associations were Bellevue Forest, Cherrydale (which then included Maywood), Donaldson Run, Gulf Branch, Lyon Village, North Highlands, Northwest, and Parkway. Led by Harvey Lampshire, president of the Cherrydale Citizens Association, the committee's representatives -- between 1957 and the groundbreaking for the current Cherrydale Library building on September 4, 1960 -- made over 50 presentations before the County Board to press for a new library building.

The architect chosen for the new building was J. Russell Bailey of Orange, Virginia, a specialist in library design. Bailey identified his chief challenges as building into a steeply sloped wooded site and maintaining the residential scale of the surrounding neighborhood. He and his associate Judson Gardner strove to save all the trees they could and to leave as much natural terrain as possible. Their enduringly attractive design has been remarkably energy efficient, making Cherrydale Library one of the "greenest" buildings in the Arlington government inventory to this day. The Bailey and Gardner firm ultimately designed some 185 libraries throughout the eastern United States, including those of Yale University, the University of Maryland, the University of Virginia, the original Arlington Central Library (1961-90) on Quincy Street, the original Westover Library, the original Shirlington Library, and Glencarlyn Library.

The building contractor for the new Cherrydale Library building was the Earl K. Rosti Company. The chief construction challenge was the carefully engineered retaining wall that forms the rear wall of the library. It has endured for 50 years. On January 13, 1962, the Northern Virginia Builders' Association gave the Rosti company its annual "best institutional project" award.

When the new building for Cherrydale Library opened at its current location on August 14, 1961, it became the first purpose-built branch library in Northern Virginia (Arlington and Fairfax counties and the cities of Falls Church and Alexandria). Today it remains the oldest existing library in Arlington County. Throughout its existence, few Arlington government institutions have provided more hours of pleasure to more North Arlington families for less taxpayer money than Cherrydale Library.


The County Government contemplated closing Cherrydale Library in 1977, 1992, and 1998, but each time the Board reconsidered after citizens registered their opposition. In 1992, the County Board removed the proposal from consideration at the February public budget hearing. In 1998, the proposal remained under consideration throughout the budget process.

During the election campaign for the County Board in the fall of 1998, the citizen volunteers who organized the defense of the library formed themselves into Citizens for Cherrydale Library (CCL) and asked each candidate for his or her views about library funding, neighborhood LIBRARies, and Cherrydale Library in particular. CCL conducted identical pre-election queries in later years. Click on the year to read each candidate's answers in 1998, 2000, 2001, 2002, February 2003, October 2003, 2004, 2005, 2006, 2007, and 2008 .

Since 2009, CCL has discontinued its written preelection queries of County Board candidates and instead has sought to note their positions on Cherrydale Library as reflected in their public remarks.

In the budget for Fiscal Year 2011 that Arlington County adopted on April 24, 2010, Cherrydale Library was closed on Tuesdays but regained its pre-2010 schedule on Thursdays and Fridays. This new schedule began on July 1, 2010. In the FY2011 budget, every branch library except Cherrydale and Glencarlyn absorbed a cut of eight hours per week in its operation. Because Cherrydale and Glencarlyn LIBRARies had already suffered an eight-hour loss in last year's budget cycle, they were exempt from additional cuts in FY2011. The Citizens for Cherrydale Library regretted the necessity of these cuts but endorsed the fairness of how they were apportioned in a letter to each member of the County Board and in remarks by CCL President Michael Gessel at the Public Budget Hearing on March 23, 2010.

During the budget process for FY2012, CCL President Gessel spoke at the public budget hearing on March 22, 2011. Click here to read his remarks. The budget that was ultimately adopted gave Cherrydale Library three more hours per week. On April 23, 2011, the LIBRARies Department announced that Cherrydale Library would get these three hours added to its Thursday schedule, allowing it to stay open until 9 pm on Thursday evenings.

_____________________
This site is maintained by Citizens for Cherrydale Library, a group of citizen volunteers seeking since 1998 to promote and preserve our most important neighborhood institution. Contact us at suza1@comcast.net with any questions or comments.